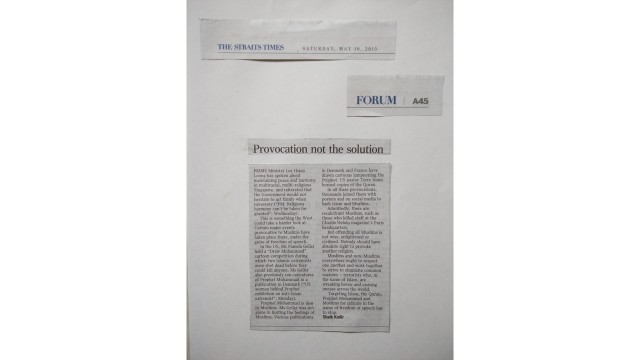 Provocation not the solution

PRIME Minister Lee Hsien Loong has spoken about maintaining peace and harmony in multiracial, multi-religious Singapore, and reiterated that the Government would not hesitate to act firmly when necessary (“PM: Religious harmony can’t be taken for granted”; Wednesday).

This is something the West could take a harder look at. Certain major events provocative to Muslims have taken place there, under the guise of freedom of speech.

In the US, Ms Pamela Geller held a “Draw Muhammad” cartoon competition during which two Islamic extremists were shot dead before they could kill anyone. Ms Geller also previously ran caricatures of Prophet Muhammad in a publication in Denmark (“US woman behind Prophet exhibition an anti-Islam extremist”; Monday).

Prophet Muhammad is dear to Muslims. Ms Geller was not alone in hurting the feelings of Muslims. Various publications in Denmark and France have drawn cartoons lampooning the Prophet. US pastor Terry Jones burned copies of the Quran.

In all these provocations, thousands joined them with posters and on social media to bash Islam and Muslims.

Admittedly, there are recalcitrant Muslims, such as those who killed staff at the Charlie Hebdo magazine’s Paris headquarters.

But offending all Muslims is not wise, enlightened or civilised. Nobody should have absolute right to provoke another religion.

Muslims and non-Muslims everywhere ought to respect one another and work together to strive to eliminate common enemies – terrorists who, in the name of Islam, are wreaking havoc and causing unease across the world.

Targeting Islam, the Quran, Prophet Muhammad and Muslims for ridicule in the name of freedom of speech has to stop.