Cherishing the love, joy and happiness Adam gave us

During his 6-week stay with us in Singapore, he gave us much love and happiness. He is my 2-year-old grandson, Adam Rayan Dula.

Adam returned to Sydney on 18 December with his parents.  My daughter who is his mother is pursuing her PhD there. Two days after their departure, my wife called him by Facetime and to our surprise, he remembers us: “Naiya,” he called my wife the moment there was visual contact. “Naiya” is his pronunciation for “Nani” (grandmother).  “Atuk”, came the next word.

When I heard it, I grabbed the Ipad from my wife’s hands and peered into his face, excitedly calling “Adam!”. He too immediately responded, “Atuk!” with glee. (Atuk is grandfather in Malay.)  He called for me whenever my wife facetimes him.

Adam learned to call me “Atuk” about three weeks into his stay with us.  I was thoroughly happy for being addressed with correct pronunciation. He has been calling his mother “Mum Mum” (for Mummy) and his dad “Dada” (for Daddy).

He calls my son and my nephew “Angka” (for Uncle) but he is yet to call “Aunty” in any way he could form the word vocally.

But his vocabulary was quite large: train, bus, car, truck, tesi (taxi), van, cloud, moon, shan (sun) and up-down, to name some words in his collection.

Adam’s complexion and chestnut brown curly hair were the attraction of many public eyes even in Phuket where we went for a 5-day holiday during the later part of his stay with us. He was enormously happy, especially whenever he saw “wa” (water) – swimming pool, pond, waterfall, rivers, the sea. He fed fishes in the clear waist-deep sea when we went island-hopping.

He loves my muscular nephew: he carried him during our walks in Phuket, held him in the sea to play with the fishes surrounding them and gave him a nice ear massage when we returned from our holiday.

His smile – well, that was the most attracting part of his expression. “It melts my heart,” said his grandmother.  Nobody disagreed.

The last day of his stay in Singapore came quite soon. My wife and I were afraid to send Adam off at the airport because we knew he would cry. He did.  He yelled, calling “Atuk”, even when I was not there.  It seemed, at the airport, when he realised I was not there with them after getting down from the taxi, he called out aloud “Atuk!”, perhaps thinking I was still in the taxi.  Such sudden “missing” cry happened elsewhere too.

Well, my wife and I as well as our family members missed him dearly.  I yearn to see him, and, of course, with modern facility such as Skype and Facetime there is no problem to see and talk but it’s nothing like physical contact.  Well, when we meet next time, we will be able to hug and feel the warmth of his love again.

We feel and yearn for his nearness, but in his case, he being still a baby, his emotion would fade sooner or later.

As for us, our emotional situation would minimise a bit when my grand-daughter who is my son’s daughter, Nur Iffah Muhd Imran, comes to our home again soon.  Iffah lives just a few minutes’ drive away from our home.  My wife and I are taking care of Iffah in the day when her teacher parents go to work except during week-ends and school vacation. Iffah and her parents could not join us for the Phuket trip because of some unforeseen circumstances, otherwise Adam, who is a few months older than Iffah, would have an exhilarating time playing together with his cousin.

Adam and Iffah are our precious jewels.

The following recent photos are among the many to remember Adam till we meet again:

A group photo taken of the family before boarding the speedboat for the island-hopping joyful trip. 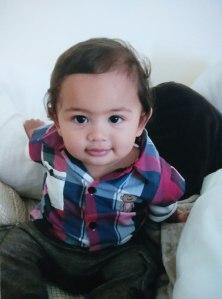 This entry was posted in Adam & Iffah and tagged Adam’s complexion and chestnut brown curly hair were the attraction of many public eyes even in Phuket where we went for a 5-day holiday during the later part of his stay with us. He was enormously , especially whenever he saw “wa” (water) – swimming pool, pond, rivers, the sea. He fed fishes in the clear waist-deep sea when we went island-hopping., waterfall. Bookmark the permalink.