She’s the  symbol of  our multiracial, multicultural, multi-religious nation and national endeavour

We Singaporeans congratulate and salute President Halimah Yacob, 63, for being Singapore’s first woman president. We are proud to have her as our president who is humble and possesses great capability and commitment in her responsibilities.

Mdm Halimah Yacob taking her presidential oath to serve Singapore as President for a six-year term.

Sworn in today as Singapore’s eighth president, she is the first woman and second Malay to be the head of state of Singapore. She makes history, and her story, as our Prime Minister Lee Hsien Loong said during his speech at the Singapore Presidential Election 2017: Swearing-in 1-hour ceremony this evening (14 September, from 6 pm), is the story of Singapore – she grew up from a poor family to become Singapore’s Head of State. Likewise, Singapore had experienced hard times but developed from 1965 to become what it is today, a prosperous and harmonious multi-racial, multi-cultural and multi-religious nation. 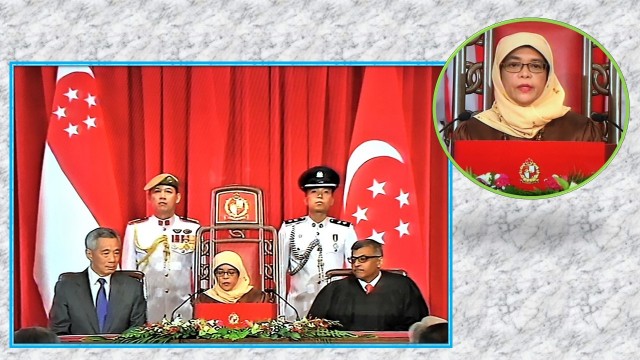 President Halimah’s journey to the presidency is interesting. Here’s her journey as given in The Straits Times (12 Sep):

• 1962: Her father dies. As a child, she helps her mother, who sells nasi padang from a pushcart plying Shenton Way before getting a hawker stall licence

• 1970s: Goes to Tanjong Katong Girls’ School and the University of Singapore where she graduates with a law degree.

• 2001: Enters politics at the urging of then Prime Minister Goh Chok Tong, and goes on to contest and win in four general elections. She was most recently a Member of Parliament for Marsiling-Yew Tee GRC.

• 2011: Becomes Minister of State at the Ministry of Community Development, Youth and Sports.

As reported in The Straits Times, President Halimah had, a couple of days ago, said: “My promise is to really serve everyone. I will serve with great vigour, with a lot of hard work, with the same passion and commitment that I have served … for last the four decades.”

She had also said: “I would like to encourage Singaporeans to work together with me so that we can work together for a united Singapore and a much stronger Singapore. This is a journey that we must take together.”

In her maiden speech as Head of State after her oath-taking, President Halimah said: “I have seen how much we can achieve by working together. Now, as President, my duty is to unite the people, to overcome the many challenges ahead of us, together. I pledge to continue this journey of service to our country. I call on all Singaporeans to join me in this endeavour. Our goal must be to leave behind a better Singapore for future Singaporeans.” 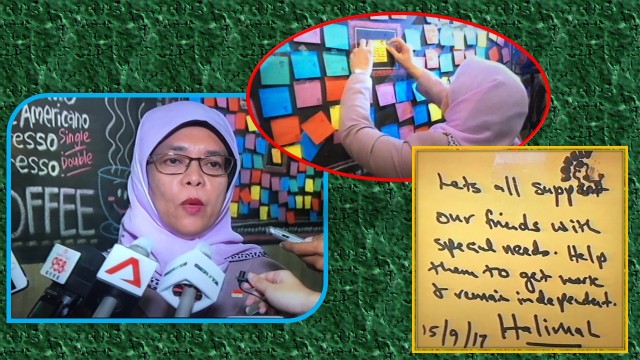 In her first public event as Singapore’s President, Mdm Halimah Yacob visited the Centre for Adults of the Association for Persons with Special Needs (ASPN) yesterday (15 September 2017).

Ms Nor Ain Saleha Hamid, writing her comments with regard to this blog article (see below), says: “Congratulations to us Singaporeans in having the first female President who embodies our values. She is a Malay but of mixed parentage of Indian & Chinese. Married an Arab husband. She’s Muslim and English educated. A high flier in her career, yet a mother to five!  Look forward to her huge contribution to Singapore. InsyaAllah, MasyaAllah, Alhamdulillah (Praise God).”

Indeed, we Singaporeans will work together with the President and the Government for our country’s peace, prosperity, progress and harmony.

Shaik Kadir
14 September 2017/16 September 2017
(Photos of President Halimah Yacob in this article are photo-shots of the photos in the recent issues of The Straits Times as well as TV screen-shots of the live telecast by Mediacorp of the President’s Swearing-in ceremony.)