The World Qur’an Hour is a day during which Islamic institutions and mosques in Muslim communities in a number of countries hold Qur’an reading for an hour on a day in Ramadhan to encourage Muslims to read the Qur’an, understand it and apply its instructions in their daily lives to be good practising Muslims.  Singapore held Qur’an Hour recently in Ramadhan. 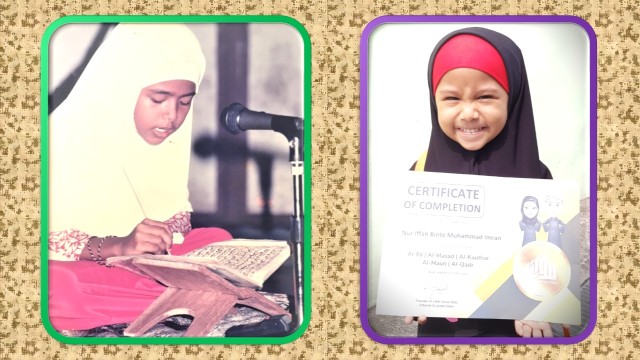 The Qur’an is so important in the life of a Muslim that children as young as three have been taught to learn the Qur’anic Arabic alphabet and recite the shorter chapters of the Qur’an. Photo above, left, shows my 9-year-old daughter Munirah Bte Shaik Kadir (now Dr Munirah, PhD, and is married), reciting  the short chapters of the Qur’an at a Children’s Qur’an reading contest (primer stage). The other photo shows my 4-year-old granddaughter, the daughter of my son, Nur Iffah Bte Muhammad Imran, showing off her Certificate of Completion of five short chapters: Al-Fil, Al-Masad, Al-Khautar, Al-Maun and Al-Qadr.

But, way before the introduction of the Qur’an Day, actually since the Qur’an, the Holy Book of Islam, came into existence from the time of Prophet Muhammad, a session called Tadarrus Al-Qur’an (gathering for Qur’an reading) was held in the mosques every night in Ramadan, usually after the terawih prayer (special prayer performed only in Ramadan nights) till the whole Qur’an is completed on a final session called Khatam Qur’an (completion of reading the Qur’an).

Ramadhan is so special to Muslims because it is not only the fasting month when Muslims throughout the world perform total fasting – no food and not even a sip of water – from dawn to dusk, but also because the month is when the Qur’an was first revealed to Prophet Muhammad – on 17 Ramadan, beginning with five verses as shown below.

These verses of Chapter 96 called “Read!” are the first five verses Prophet Muhammad received from God (Allah) through Angel Gabriel and the Revelations went on for 23 years till the Qur’an became completed, with the religion for mankind named as “Islam” as mentioned in the Qur’an itself.

The Qur’an has 114 chapters divided into 30 Jus (sections). For the daily Ramadhan Tadarrus Al-Qur’an session, the Qur’an is often read in a group led by a leader, often reading one jus a night, or two jus where the chapters are short. In the final reading for the Khatam, the group would read the last ten chapters of the Qur’an where the chapters are shorter – for instance, each of the last three chapters comprises not more than six short verses:  Chapter 112 (Ikhlas or Purity) – 4 verses; Chapter 113 (Falaq or The Dawn) – 5 verses, and Chapter 114 (Nas or Mankind) – 6 verses.

I attended a Khatam Qur’an session at the Al-Taqua Mosque last night – 27 Ramadhan coinciding with 12 June 2018. The following are the photos taken at Masjid Al-Taqua. 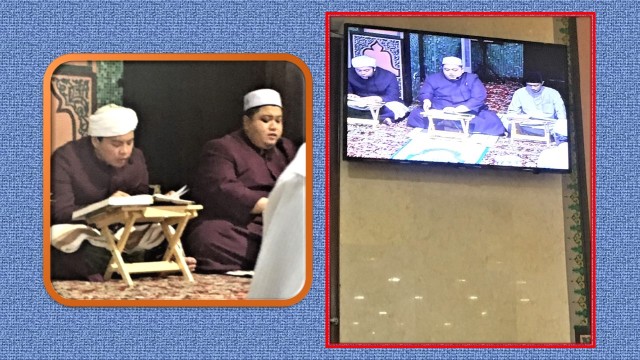 At the Khatam Qur’an session at Al-Taqua Mosque, Jalan Bilal:  The Qur’an reading leader, right, leading the session is shown on the TV monitors for all in the mosque to watch and read together.

The other lead readers facing the audience, some of them are young people apt in reciting the Qur’an. 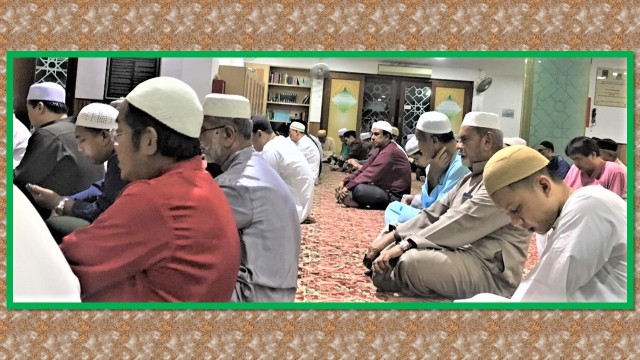 A section of the audience. The women are in an adjacent hall.

Eid ul-Fitr (Celebration Day of Charity) or commonly called in Malay as Aidil Fitri is on 1 Syawal (10th month of the Islamic or Hijra calendar) and it falls on 15 June in Singapore and in neighbouring countries.