With the prayers and survival hope of relatives and friends and others all over the world, all the 12 young Thai footballers and their coach who were trapped in a flooded cave in Chiang Rai, Thailand, were rescued by 11 July. 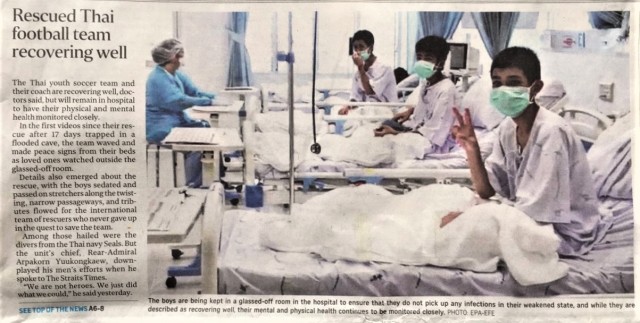 Picture of photo in the front page of The Straits Times of 12 July 2018.

We salute the 13 stranded people for having the resilience in enduring the hardship they faced for 17 frightful days in a cave that was flooded, cold and dark. What’s also amazing is these young boys went without proper food, drink and sleep during this period.

A Singaporean diver, Mr Doughlas Yeo, who was among the international group of rescuers, was quoted by The Straits Times, 13 July, 2018, as saying: “When I look at the boys from the football team, they are my heroes because if they didn’t have the guts, they would not have survived.” 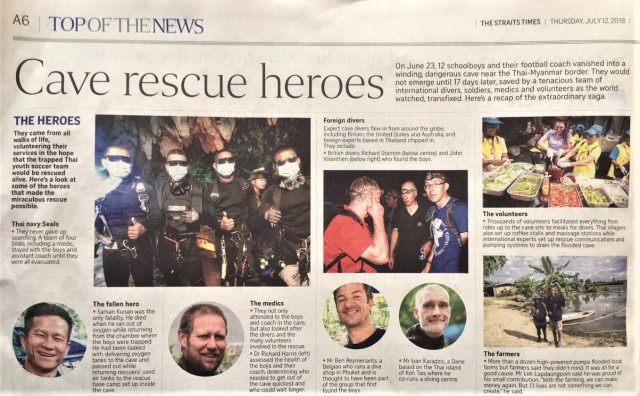 We also salute and thank all the people involved in this rescue operation, including the expert divers and the rescue and medical teams as well as the numerous volunteers and countries that extended help to save the trapped 13. 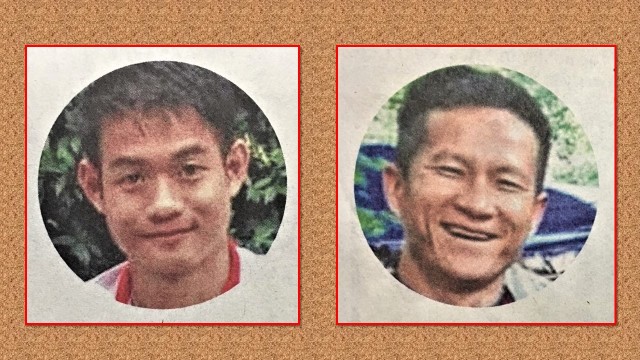 Pictures taken from Page A6 of The Straits Times of 12 July 2018.  The picture on the left is that of Mr Ekkapol Chantawong, 25, the coach who, during their ordeal in the cave, motivated the boys and gave them encouragement. The other picture is that of Mr  Saman Kunan, 38, diver, who died when he ran out of oxygen while returning from the chamber where the boys were trapped.

It was a great relief to hear of the good news that the 11- to 17- year-old boys and their soccer coach, Mr Ekkapol Chantawong, 25, have been rescued and are recuperating from their ordeal in a Chiang Rai hospital and will be discharged soon.  Welcome home, heroes!

While we celebrate the safe return of the football team, we are reminded of Mr Saman Kunan, the diver, who lost his life in an attempt to save the stranded young people. Rest in peace, Saman.

This episode is a display of great humanity and unity.   Trully “Great things can be achieved when people from various nations work together for a commom goal,” wrote former Thai minister Nalinee Taveesin on her Facebook on 10 July 2018. True indeed.

We are facing great natural disasters like droughts, floods and earthquakes in many parts of the world that have destroyed crops and homes and killed people.  It is about time that people all over the world set aside their political, religious and racial differences and work together for humanity’s common good.  This Chiang Rai cave rescue operation is a good lesson to follow in forging humanity and unity for our common survival on the face of this earth.

“Ordeal of stranded Thai boys: We are with you, and we pray that all will be rescued soon”  ( https://readnreap.wordpress.com/2018/07/07/ordeal-of-stranded-thai-boys-we-are-with-you-we-pray-that-all-will-be-rescued-soon/  )

This entry was posted in General interest (Wide-ranging) and tagged 13 trapped in Chiang Rai, a good lesson to follow in forging peace, cave, great humanity and unity effort, Thailand. Bookmark the permalink.