A group of  friends, comprising 12 Singaporeans and one Indonesian working in Singapore, went to Medan for a 5-day trip from 8-12 August (2019), the objective being to celebrate Eid ul-Adha (or Hari Raya Haji in Malay), and to perform the qurban (slaughtering of sheep and cows) whose meat was distributed to the poor. 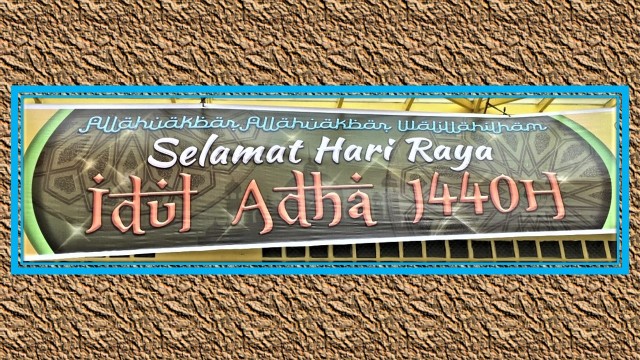 An Idul Adha or Eid ul-Adha (Festival of Sacrifice) banner displayed on a building in Medan welcoming the celebration of sacrifice of  halal livestock for the meat to be distributed to the poor, an act of charity held over three days. (1440 H is the Islamic year, Hijrah, which means Islam was instituted 1440 years ago.)

In the group of 13 friends, three are non-Muslims – Rachel, Thana and Suguna.  We had an interesting time together.

Four people made some comments about our Medan trip.

“Our Medan trip was simply awesome. It’s not just because my best buddies were with me but because I had the privilege of getting to know some new people who made the trip a memorable one.

Be it during the breezy boat ride, or stopping on an impulse for durians, or visiting the Batak execution chamber or taking the crayfish lunch, we broke jokes, shared anecdotes and had so much laughter, fun and joy.

It was one of those trips where it matters not where you go but who you go with!”  – Ms Suguna Ramasamy

We were lucky to have Ms Sri Zuraida Zainal Abidin in our group, whose father, (her mother has passed away) and siblings live in Medan. We visited their home early in the morning of Hari Raya Haji and together went for the Hari Raya prayer in a mosque near their home and later went for the qurban ceremony in a vacant area in a village. 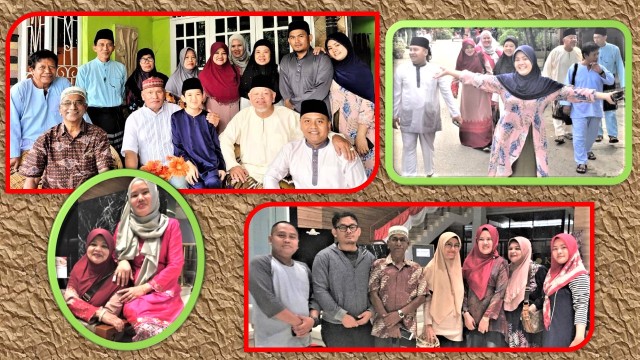 During the trip, we often met up with the Medan family members of our Singaporean friend, Sri Zuraida who was in the group. 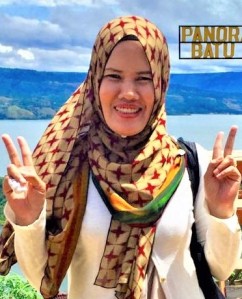 “I feel very honored for the group to have visited Medan and met my family members.

I am thankful to the Muslims in the group to celebrate Aidil Adha and making the qurban in my family’s village.

Many poor people in the village got the opportunity to meet Singaporeans and they found them very friendly.

From the qurban of the Singaporean Muslims in the group and that from some people in the village, those kampung people who are poor had more qurban meat to eat, and the kampung people are very thankful for that.  It is good charity.

On Sunday, 11 August (2019), while the Muslims went to Sri’s sister’s home some distance away from the hotel to perform the qurban rites, Rachel, Thana and Suguna went shopping, accompanied by their Muslim friend, Juliana, from the group.

Shopping was a delightful activity.  Members of the group bought things from batik and baggage to fruits and foodstuff to be taken home.

Some of the interesting places we visited included cruising in the huge and scenic Lake Toba, Samosir Island where we visited Batak houses at the Ambarita Village and learned of the history of the Batak people, Barastagi province where we visited its Grand Mosque, and in the Medan city, we visited the Maimoon Palace.

Lake Toba cruise: The cruise in the extensive waters of Lake Toba was a slow boat-ride allowing us to enjoy the scenic beauty of the lake and mountains surrounding it. We were heading for Samosir Island in the far end of the lake.

At Samosir Island, we were given an in-depth explanation of the history of the Batak people, their culture and lifestyle. We were also taken into one of the Batak houses of olden days to see its interior and later to the criminal execution area where beheading for extreme crime was executed, an act now forbidden.

Travelling along the mountain roads was enjoyable as we frequently see Lake Toba, and we even stopped to enjoy the beauty of the lake spread below from the mountain edges.

Resting and enjoying the view of the lake and its surroundings, stopping along the road for rest and snacks as we carried on travelling along the mountain roads.

We even stopped over for a super multi-herb hot tea drink at a resthouse surrounded by flower plants. 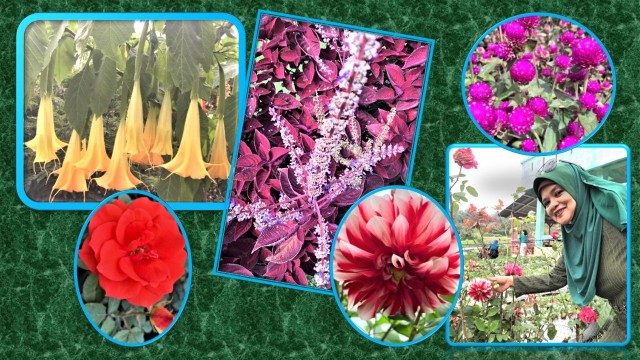 And the ladies couldn’t resist touching the mountain flowers… 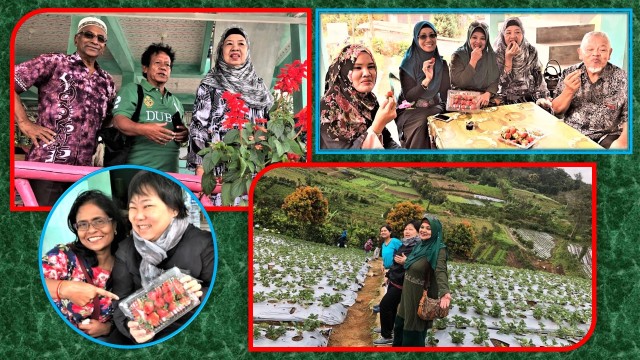 And then we came to a strawberry plantation where we could walk along its bunds to pluck the fruit ourselves to be weighed for purchase.

And then, as we rode on in our tourist mini-bus, we spotted a durian seller along the road and we could not resist our temptation to go near the king of fruits to smell them and finally relish them to our hearts’ content.

During our tour, we visited a Pagoda, temple of the Buddhists, and explored its interior, beholding the relics displayed in its hall.

In the afternoon, after completing our qurban rites, we had an audience with the Sultan Langkat, Tuanku Yang Mulia Azwar Aziz Abdul Djalil Rahmadsyah Alhaj, during which I proposed that we could have a student-exchange programme for our students to visit them and experience village life and observe the  mountains, fruit trees, plantations and farms and their students can come to Singapore to learn about our lifestyle, and enjoy our food and attractions.

And later in the day, we had audience with Sultan Langkat, Tuanku Yang Mulia Azwar Aziz Abdul Djalil Rahmadsyah Alhajj.

And, at the end of the meeting with the Sultan, we had the opportunity to take photos with him.

“We were lucky to meet up with an important person for an audience. He was Tuanku Yang Mulia Azwar Aziz Abdul Djalil Rahmadsyah Alhajj.

A soft-spoken person, Tuanku told us his roots and his past extensively.  He also told us how the people in the villages lived, and the challenge taken to make the Malay language recognised internationally.

He would like to see the young people of today with western influence coming back to their culture and be more open-minded.

We admire his vast knowledge of this region and of his people.”   – Mr Imhar Said

Of course, Muslims crowded the many mosques in Medan to perform the Eid ul-Adha solat (prayer) at around 7:30 in the morning.  Then, at about ten, the qurban activity began.

The Muslims in our group visited mosques where we performed voluntary prayers as well as our obligatory payers, and in one of them, middle photo, we performed the Eid ul-Adha prayer, beginning at around 7 am on 11 August (or 10 Zulhijjah, the 12th month of the Islamic year).

The slaughtering was done following Islamic rites and instructions to relax the animal and to be compassionate to them before and during the slaughtering them, and keeping some distance away from each other with the blood flowing into a pre-made hole in the ground. 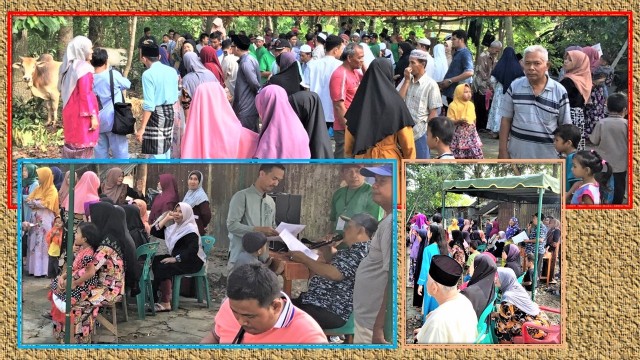 A gathering to watch the qurban: After the Eid ul-Adha prayers in the morning, it was time for the qurban, the sacrificing of livestock like cows and sheep carried out by trained butchers, for charity – with the meat given away to the poor later when the meat has been cut up into chunks.

The Muslims in the group are happy to have accomplished our main objective of going to Medan – to celebrate Hari Raya Haji and offering our qurban to benefit the poor.

Regarding the qurban (or spelt in Malay as korban), God says in the Islamic Holy Book, the Quran: “Celebrate the name of God through the days appointed over the herds for sacrifice.  Then, eat and feed the unfortunate and the needy.” (22:28).

The qurban ceremony, held during the Haj in Mecca, is conducted at a location far away from the crowd, and the meat is deep-frozen and donated to the poor in countries around the world.

Sri’s siblings, Adhe Ahmadsyah Ramadhan Zainal Abidin, Nur Asmanissa Zainal Abidin, Sri Rahayu Zainal Abidin and her brother-in-law Agung Kurniawan (husband of Sri Rahayu), were also happy to take us shopping. We are very thankful to them for their hospitality and generosity.

“Salam to everybody in the Singapore group.

Alhamdulillah! I am pleased to welcome the delegation from Singapore and I wish everyone all the best.

I hope, all of you had a nice and enjoyable time in Medan and also during your cruise in Lake Toba and the tour to Samosir Island and Brastagi.

Thanks to those who visited my home and gave us the opportunity to do the Aidil Adha prayer together.

I hope, members of the Singapore group will stay healthy so that we can see each other again next time.

Photos are a must for remembrance: The hotels we stayed during our Medan trip.

As for our three non-Muslim friends, they too enjoyed the Medan trip. Best of all, we all gained deep friendship and we shall keep it.